Alaric Clement Pires was born on July 20, 1927, in Tanga, Tanzania to Angelo and Esmeralda Pires. He was the sixth of their eight children, predeceased by his parents and siblings: Anslem (Flora), Arthur (Marie), Alex (Sophie), Alfred (Olga), Adolph (Catherine), and Rita (Bonny de Silva). He is survived by his sister Bella (late Joe De Souza). Alaric is also survived by his wife of sixty-seven years, Rosalind (nee D’Souza), who he married in 1954 after being introduced by his Godmother in Bandra, Mumbai.

Rick and Rose settled in Tanga and started their family of six children: Arlene (late Brian D’Silva), Austin (Angela), Gavin, Sarah (late Joe D’Souza), Jacqueline (Mo Gujarati), and Jude (Pavlina). As a parent, Rick was a disciplinarian, but also a loving Father and a good provider who made it a point to get little treats for the family as much as he could.

In Tanga Rick worked as an auto body mechanic for Riddoch Motors. During his twenty-five years with Riddoch, one of his professional achievements was designing and painting the logo for the Bata Shoes fleet of vehicles. He had an eye for colour and was able to easily tint paint to match specialty finishes. Rick’s skills in his trade would eventually bring him to Canada - a country with which he first became fascinated while working on large vehicles that were imported from there, and seeing movies at the Canadian Embassy that promised a wealth of opportunities. In 1967 Rick moved the family to Owen Sound, Ontario where he worked at an automotive company, and then eventually started work at Canadian National Railway, from where he retired. While at CN, Rick was recommended to be a grievance officer with the union because of his approachability and ability to get along with everyone. His friends and family will all remember Rick’s sense of humour.

Rick’s grandchildren-- Brendon, Rebecca, Adam, Eric, Andrew, Kristen, Shawn, Alanna, Aaron and Michael-- will remember him as laconic but quick-witted, passionate, persistent, and selfless. There will always be some debate as to what his favourite ice cream flavour was because it varied depending on which grandchild he was talking to; he liked them each to think that they had that one special thing in common with him. But they all also share his determination, generosity, and love of laughter.

Alaric Pires passed away peacefully in his sleep at the age of ninety-three on February 16, 2021.

In lieu of flowers, donations in memory of Alaric Pires can be made to the Princess Margaret Hospital Foundation, Myeloma Research Fund.  His family thanks you for your support.

The funeral mass will be livestreamed on Wednesday  February 24th beginning at 11 am via the link below.

Please click on the following link to view a picture slideshow with family photos & memories. 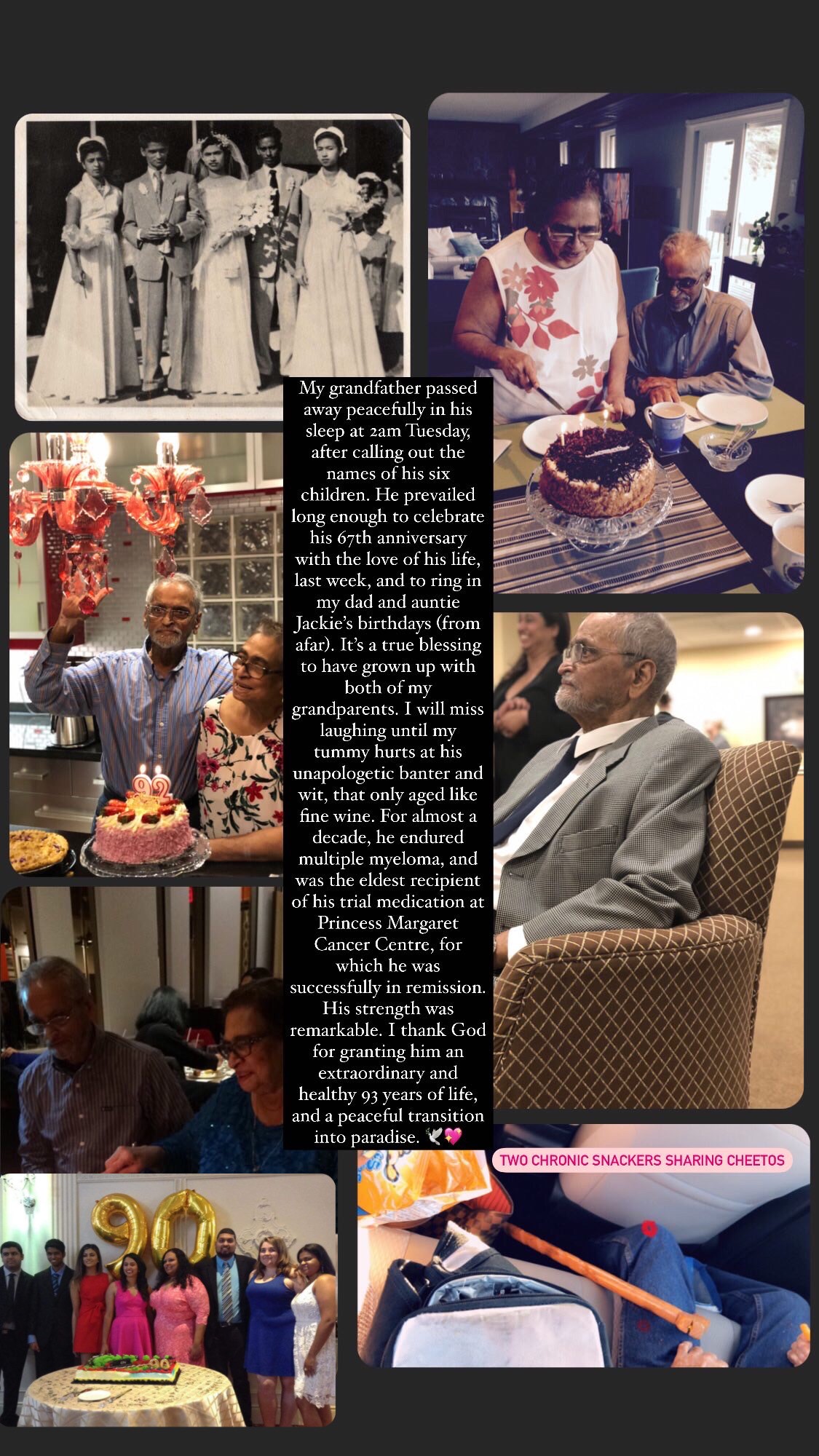 Written the day my grandpa passed away.

Dear A. Rosalind, Austin,Jackie, Gavin, Jude, Sarah & Arlene & families, We are thinking of you with love and sympathy during this time of loss. May warm memories and family and friends comfort you. May he now rest in eternal peace. Olga sends her deepest sympathy and prayers to Rosalind and the whole family. ,