Robert Ian Dudley Riches arrived in this world on April 22nd 1946 and departed on June 27th 2021. He started life in Inverness, Scotland and completed his mission in Nanaimo, BC. His departure was sudden and unexpected; all who knew him are mourning the loss of this unique and brilliant man.

Those who are especially bereft are his wife of 25 years, Ellen Kay Riches (nee Bunyard) and his two step sons Jeffrey Philemon Wright and Kevan James Schell. He has left a very big hole in each of their lives.

He is predeceased by his mother, Kathleen Elspeth Riches (nee Donald) and his father Victor Clarence Dudley Riches. He leaves behind his brothers Michael and Donald and his sister Victoria.

Rob was a consummate teacher and student who loved nothing more than gaining knowledge and engaging in passionate debate. He obtained his BSc in Electronics from the University of Manchester, Institute of Science and Technology (UMIST) and his MSc in Electronics from the University of British Columbia (UBC). It was his journey to UBC that brought him to Canada in 1969 where he remained until returning to England with his wife Ellen in 1996.

After several years at TRIUMF at UBC, he explored teaching and became a teach at the Outdoor School in Powel Lake. From there he moved on to being an Instructor in Mathematics and then Electronics at British Columbia Institute of Science and Technology (BCIT) and then to Camosun College in Victoria. He finished his teaching career at Coulsdon College in the UK and returned to Canada in 2007.
In retirement, he pursued one of his main passions; life coaching and training. He developed his own paradigm and loved nothing more than researching and helping people to fulfil their own true purpose.

He had many passions and interests but the top two seemed to be music and sports. He sang with the Bach Choir in Vancouver and the Malaspina Choir in Nanaimo. He played many sports but the main one that stuck was Soccer (football) which continued into later life. When he couldn’t play any more; he enjoyed watching sports on TV – his love of cricket still remains a mystery to his bemused wife. He was also a member of Toastmasters where he continued to develop his speaking and debating skills. Something he truly loved to do.

His spiritual path started early as a student and then teacher of Transcendental Meditation which led to even deeper explorations of meditation and the development of his own paradigm – Soul Dynamics.

Always searching and inquiring into the mysteries of the Universe, Rob left no stone unturned in his quest for knowledge and understanding.

He lived his life well and left the world a better place. 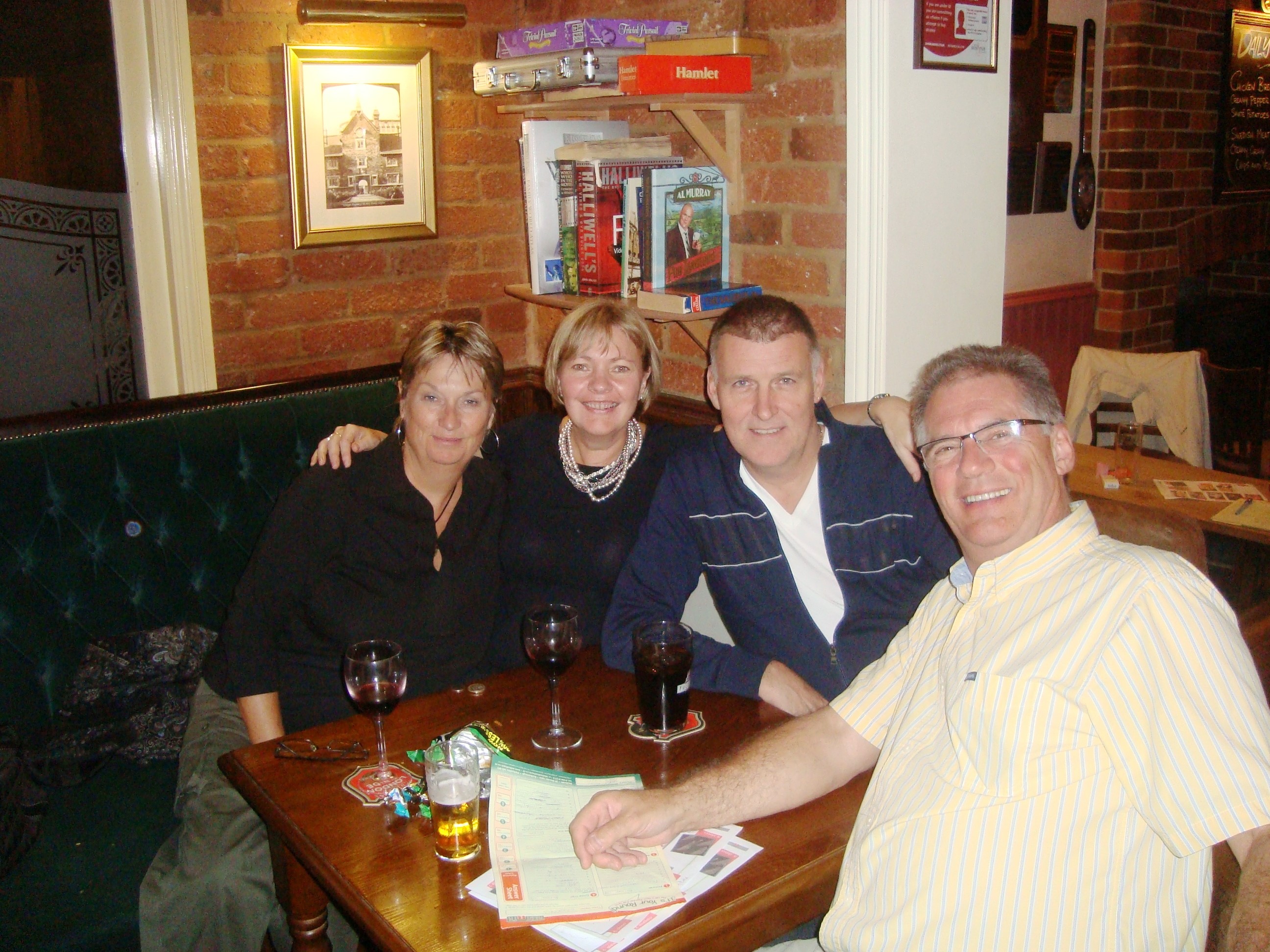 My wife and I became friends with Rob and Ellen about 11 years ago in Wasaga Beach, ON. We particularly enjoyed going to a pub quiz each Wednesday with them and even did one together in England when we all happened to be in Croydon at the same time (see photo below). Rob was in a class of his own but never left anyone feeling they weren't good enough and we learned many things from Rob regarding the world, the universe and some of the more spiritual aspects we were trying to grasp at the time. One thing I will never forget Rob saying was after chatting about the state of the world, the human psyche, where is it going to end up, are we inherently good or bad as humans, Rob said nothing can improve until there is a raise in the collective consciousness! He was right and I have borrowed that line many times. As we look at our lives and learn increasingly more to value the precious little time we have with family and friends, we certainly appreciate the wonderful times we shared with Rob (and Ellen), they were always something special and we feel blessed to have experienced those times. RIP and thanks for everything Rob.

Although for most of the time that we knew Robert, we lived at opposite ends of the country, I did get to play a round of golf with him some years ago, when they were living in Wasaga Beach. So we should add golf to his list of hobbies. Robert and I met halfway, at a course somewhere around King and the 400. The game itself was not spectacularly memorable as neither of us were in the running for a place in the PGA. But somehow we ended up with more golf balls than when we started. I'm sure this was a nod to both of our Scottish ancestries. Rob certainly had enthusiasm for the task. We may have broken even on the Green fees and I shared in the bounty.