After a long and rich life, died peacefully in his 98th year on April 20, 2020. Born in Fredericton in 1922, he completed a BSc degree in his native New Brunswick in 1947, after his studies were interrupted by wartime service in the Canadian Navy. After spending 1948-1949 studying economic geology as a graduate student and Beaverbrook scholar at the Royal School of Mines in London, England, he earned a PhD degree at the University of Toronto in 1957 and launched his teaching career. Digger was a renowned geologist and professor who taught for more than 40 years at the University of Toronto. He was a popular lecturer at the Royal Ontario Museum
and the Walker Mineralogical Club, the oldest mineral club in Canada, which named him its Honourary President in 1981. In 2009, he was inducted into the Canadian Mining Hall of Fame and had a mineral (Gormanite) named in his honour. He was a lifelong member of The United Church of Canada and an active member of the Masonic Lodge.  He is predeceased by his loving wife Reta (nee Hill) and was a proud father of Lana (predeceased), Bill (Terry), Tom (Jane) Kathy (Mike) and Liz (Bart). Fondly remembered by his ten grandchildren Wendy, Doug, David (predeceased), Jennifer, Dan, Emma, Matthew, Michelle, Kait and Maggie and by his eleven great-grandchildren Rachel, Brayden, Tyler, Dylan, Anna, Calvin, Owen, Eleanor, Luke, Kendra and Makaela. Digger leaves behind an enviable legacy of kindness, generosity, compassion, an inquisitive mind and a love of life. His extraordinary curiosity and love of learning filled his world. With a breadth of knowledge on a staggeringly large number of topics, he was the original Google before it existed for his family and all who knew him.  At 97, he played the harmonica in a Hillbilly band, wrote short stories, composed a collection of limericks, participated enthusiastically in a mental aerobics group, was a member of the board of directors for Sunnybrook Health Sciences Centre and was an executive on the Sunnybrook Veterans Council.  A heartfelt thanks to all of the compassionate and incredible caregivers at Sunnybrook Hospital’s Veterans’ K Wing whom he adored and respected so much.  The family will be holding a private interment service and a memorial service will be planned in the future when current restrictions are lifted. 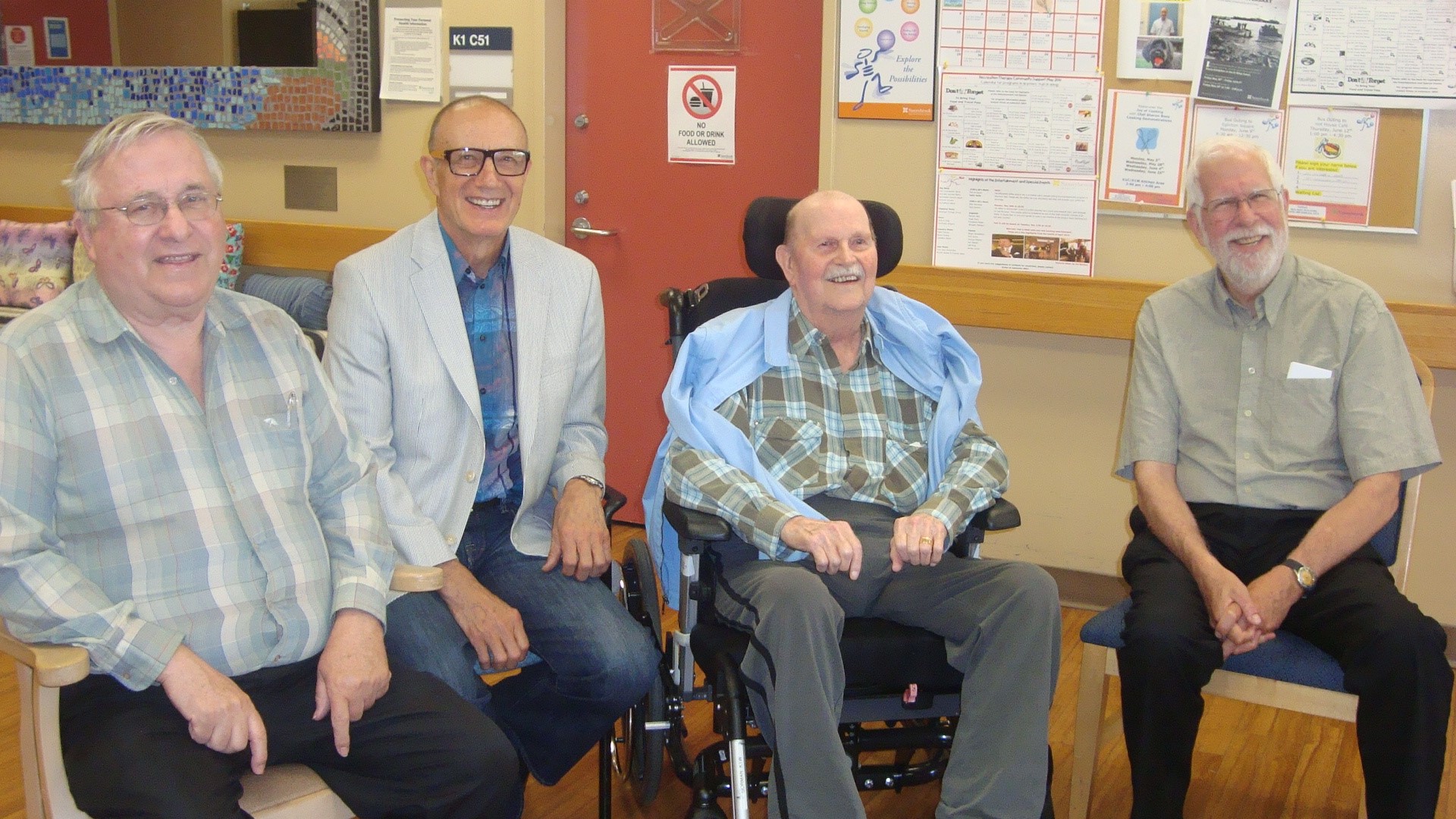 Our family lived on Northdale Blvd. and shared early years with the Gorman family. There were about 20 houses on our dead-end street. We were known as the Northdalers. Our parents belonged to a bowling league, there were pool parties at our house and holiday celebrations - a real sense of community. The mothers participated in a monthly euchre club which went on for 40 years. Thru the mothers' network, we always knew how all us kids were finding our own ways in the world. I visited Dig at Sunnybrook a couple of times, and organized a small group of his grads from the early 60's for a reunion about 6 years ago. Dig was always interested in what I was up to and I'll remember his laugh.

From the first day I was introduced to Digger by my preceptor nurse, I had a feeling that he would be a lovely resident that I was going to have during my placement at the Veteran's Centre. Indeed, he was a huge reason why I enjoyed my placement so much. He has an amazing personality that makes him so loved by the staff, the residents and people who got to know him. He was also interested and fastinated in asking questions about my country and the culture. At the end of the placement, he got me a Christmas scarf and invited me back to a pizza lunch on the unit. Digger will always be honored and missed in my heart as well as others'. Also, best reagards to his family.